Blum to Speak on The Real Computation Controversy 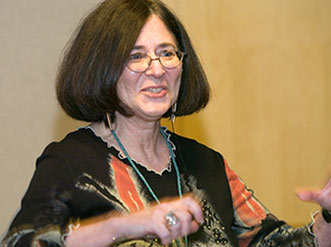 Lenore Blum, Carnegie Mellon University, will deliver a MAA Invited Address on Wednesday January 13, 2010, 2:15 p.m. - 3:05 p.m. She will speak on The real computation controversy: Is it real? This lecture will be held in the Main Lecture Room, 2nd Floor, Moscone Center West.

Lenore Blum is Distinguished Career Professor of Computer Science at Carnegie Mellon where she co-Directs the ALADDIN Center for Algorithm ADaptation, Dissemination and Integration, is faculty advisor to the student organization Women@SCS, and PI for the Google funded CS4HS program. Her most recent creation and passion is Project Olympus, a high tech innovation center at Carnegie Mellon which she directs.

Lenore received her Ph.D. in mathematics from M.I.T. in 1968 (the same year Princeton first allowed women to enter their graduate program). Her research, from her early work in model theory and differential fields (logic and algebra) to her more recent work in developing a theory of computation and complexity over the real numbers (mathematics and computer science), has focused on merging seemingly unrelated areas.

Lenore taught at UC Berkeley, founded the Mills College Department of Mathematics and Computer Science (the first CS department at a women’s college) was senior researcher at the International Computer Science Institute, and Deputy Director of the Mathematical Sciences Research Institute.. She has served the professional community in numerous capacities including as President of the Association for Women in Mathematics and vice-President of the American Mathematical Society and is a Fellow of the American Association for the Advancement of Science. In 2005, she received the US Presidential Award for Excellence in Science, Mathematics and Engineering Mentoring (PAESMEM) for her over 35 years of creating programs to increase the participation of women in scientific and technical fields including the Expanding Your Horizons conferences for middle school girls.

Abstract: The real computation controversy: Is it real?

There are two major “competing” approaches to modeling computation over the reals, the algebraic approach and the bit model approach. I would argue that each abstraction provides useful insights. Moreover with regard to computational complexity, the two approaches are naturally linked via the condition of a problem instance, as introduced by Turing in 1948. Much work has been done during the past decade pursuing this direction.