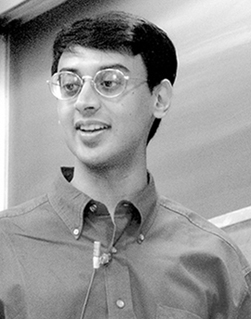 Manjul Bhargava, Princeton University, will deliver a MAA Invited Address on Wednesday January 13, 2010, 3:20 p.m. - 4:10 p.m..He will speak on The factorial function, integer-valued polynomials, and $p$-adic calculus. This lecture will be held in the Main Lecture Room, 2nd Floor, Moscone Center We

Manjul Bhargava received his A.B. degree from Harvard University and a Ph.D. from Princeton University in 2001.  After spending a year each at Harvard and the Institute for Advanced Study (on a Clay Research Fellowship), he joined the Princeton faculty as Professor of Mathematics in 2003. Bhargava's research interests include algebraic number theory, representation theory, and combinatorics, though he also spends much of his time on algebraic geometry, linguistics, mathematics education, and Indian classical music.  A versatile speaker, he has given numerous seminars, colloquia, invited addresses, and public lectures at colleges and universities across North America and Europe.

Bhargava's other honors include the AMS-MAA-SIAM Frank and Brennie Morgan Prize in 1997, the MAA Merten Hasse Prize for mathematical exposition in 2003, the AMS Blumenthal Award for the Advancement of Research in Pure Mathematics in 2004, a Packard Foundation Fellowship in 2004, the Clay Research Award in 2005, the SASTRA Ramanujan Prize in 2005, and the AMS Cole Prize in 2008. In 2002, Bhargava was named to Popular Science magazine's first list of "Brilliant 10," an annual celebration of ten scientists who are shaking up their fields.