Wilkinson to Speak on Chaos and Symmetry 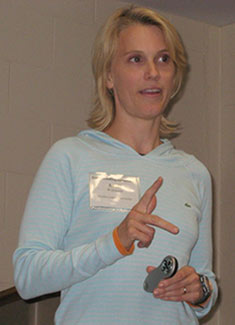 Amie Wilkinson, Northwestern University, will deliver an AMS Invited Address on Wednesday January 13, 2010, 10:05 a.m. - 10:55 a.m. She will speak on Chaos and symmetry in partially hyperbolic systems. This lecture will be held in the Main Lecture Room, 2nd Floor, Moscone Center West.

Amie Wilkinson received her PhD from the University of California at Berkeley in 1995. After a post-doc at Harvard, she went to Northwestern University, where she is now Professor of Mathematics. Her research interests include ergodic theory, smooth dynamical systems, and foliations. As an indication of her success in these fields, we note that she will be one of the invited speakers in the session on dynamical systems at the 2010 International Congress of Mathematics in Hyderabad, India.

Wilkinson’s talk will focus on partially hyperbolic dynamical systems, which arise in a variety of classical contexts, both algebraic and geometric. These systems are subject to many symmetries and yet are typically chaotic and highly unpredictable. In her talk, Wilkinson will survey results about such systems and discuss the interplay between the mechanisms behind chaos and symmetry.